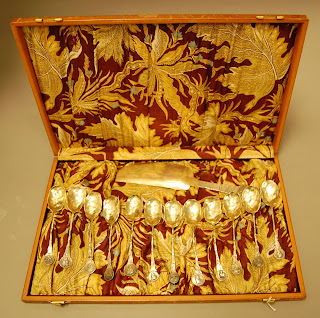 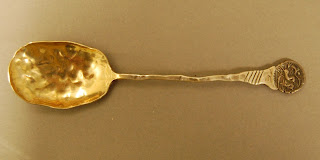 Image of one silver spoon with an ancient roman
coin decorating its handleLocated as we are right next to the Kentucky School for the Blind, our museum has a lot of great stuff from KSB. Our object this week reminds us that the historic residential schools were more than just buildings, they were small villages and life there had its own rhythms. The school’s second superintendent was Benjamin B. Huntoon. His daughter, Mary Josephine (1861-1949), grew up living with B.B. and her mother Sara in the big building on Frankfort Avenue that the school built there in 1855. Although sighted, she would have attended school there and been constantly underfoot both teachers and staff. When Mary Huntoon married Dr. Ap Morgan Vance, a prominent Louisville surgeon, in 1885, the staff at KSB gifted her with this unusual silver desert set. Evidently, it was briefly the fashion to decorate tableware with ancient coins. Interest in archeology had been stoked by the pioneering work (some called it treasure hunting!) of the German archaeologist Heinrich Schliemann. Each of the twelve silver desert spoons and the cake server has an original Roman coin soldered into its handle. Apparently, although they were thousands of years old, the coins themselves were not very valuable individually because so many had been minted. They feature the heads of gods and emperors, mythical creatures like Scorpio, and mundane images of Roman ships. The blade of the serving knife has the following inscription: “Mary J. Huntoon, From the employees of the KY. Inst. For the Blind. Thos. Lucas. Alex Lucas. Hannah Murphy. Kate Burke. Annie Kelly. Kate Henley. Annie Fahy. Mary Curry. Bridget Curry. Bridget Cain. Annie Cain.” I find this interesting. These eleven workers were the lowest paid members of the team at KSB in 1885: the gardeners, the cooks, the maids, and the “dining room girls.” The Vances went on to have eight children!

Alison Currey
Being a Literature Students she loves to write and always kept working for the society and who really need a hand. Apart from writing she is an excellent singer herself. Have found her either reading or drawing in her free time. An inspiring personality you may want to follow at FredForum here.

by Chef Peter Martin Let’s face facts; we have all had our fair share of kitchen disasters, even us “professionals”, though we might not admit it. From food being too salty, to scorched soups, to broken hollandaise, disasters do, and will, happen. The good news is that many of these so-called “disasters” can be fixed Read More…

Free Typing Tutor for the Blind

TypeFaster is a typing tutor that teaches you how to touch-type. Touch-Typing is using the sense of touch rather than sight to find the key. Once you can touch-type you will not need to look at the keyboard to find the letters you want to type. Kids are not the only ones who can benefit Read More…

Lots of people visiting my house comment on all the different gadgets I have, but the only one they ask me about, so they can get one of their own is my double draft stopper. Sometimes the simple and cheap is more impressive than the complex and expensive. The Twin Draft Stopper is two long Read More…