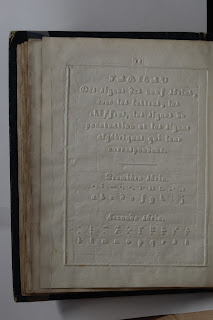 Today the world will celebrate the 209thbirthday of Louis Braille, born January 4, 1809 in Coupvray,France. After an accident left him blind, Louis was able to attendthe National Institute for Blind Youth in Paris, France. He met a soldier,Charles Barbier, who had proposed a dot code you could read by touch in thedark. Louis simplified the code and published it for the first time in1829. APH was able to acquire a copy of that book, the Method ofWriting Words, Music and Plainsong in Dots, in 2016 and it is the mostprized artifact in our museum. Embossed at the school by staff andstudents, it is hard to imagine that every copy was not touched in some way bythe great inventor. APH will celebrate Braille’s birthday and our newestexhibit “A Boy Named Louis” at a special event on January 20th. You can find out more here.

Quick Tip: Joy Player File Extensions. Make sure the files you add to the Joy Player have the right extensions so they play as they should.

We use cookies on our website to give you the most relevant experience by remembering your preferences and repeat visits. By clicking “Accept”, you consent to the use of ALL the cookies.
Cookie settingsACCEPT
Manage consent