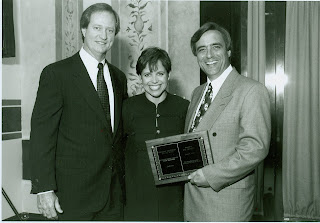 Tuck Tinsley, Katie Couric, and Ray Foushee
smile at the camera. Foushee holds an award plaqueFrom 1986 until 2006, the American Foundation for the Blind presented the Alexander Scourby Awards to the best Talking Book narrators in the country at an annual ceremony. If you are wondering, Alexander Scourby was an actor best known for his Talking Book recording of the Bible for AFB in the 1950s. Our Throwback Thursday story comes from one of those ceremonies in June 1995. Legendary APH narrator Ray Foushee was honored that year in the nonfiction category. In the publicity photo for the award, Foushee stands with Dr. Tuck Tinsley, APH company president from 1989-2016, and the awards hostess, Katie Couric. At the time, Couric was the co-host on the Today Show on NBC. The APH Studio is still going strong and so is Ray! His most recent project was “A Killing in Real Estate,” a murder mystery by Michael Castleman.

Eden Martin
He loves travelling and an amazing writer at FredForum. An extrovert who is found with a group of friends any day except when he is writing.

Parenting with a Visual Impairment

Freedom Scientific and the American PrintingHouse for the Blind have partnered to make a “JAWS® and MAGic® Student Edition”available starting today to K-12 students in the U.S. using Federal Quotafunds! These special software subscriptions are purchased exclusively throughAPH and allow students to install full versions of JAWS and/or MAGic on ANYcomputer they access (up to Read More…

We use cookies on our website to give you the most relevant experience by remembering your preferences and repeat visits. By clicking “Accept”, you consent to the use of ALL the cookies.
Cookie settingsACCEPT
Manage consent