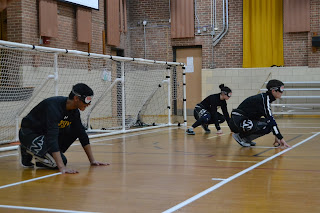 Three players crouch in front of goals at the ready.
Photo credit Dotty Raynor, The Maryland School for the Blind Imagine being blindfolded and lying on a gymnasium flooras you attempt to block a ball full of bells hurtling toward you. This game, known as goalball, is enjoyedthroughout the blind and visually impaired community especially in grade school. Fortunately, athletes don’t have to stopplaying goalball when they reach the collegiate level. Starting a team at auniversity can be a fantastic way to continue playing and meet greatpeople. For these reasons, MuhammadWaheed worked with others to create a goalball team at Towson University.

When he was a sophomore in high school, Muhammad beganplaying goalball as part of an outreach program through The Maryland School forthe Blind. His two coaches were adaptedphysical education and health teachers Matt Mescall and Bev Marhevka. Coach Mescall and coach Marhveka taughtMuhammad and his friend, Tim Utzig, a great deal about goalball, including thefact that every player must be open to playing all three positions: left wing,right wing, and center.
“I’ll admit I started off playing the right wingposition,” Muhammad said. “However, that has changed. I’m capable of playing all three positions and I just do what coach asksand what the team asks.” In this way, Muhammad became a more flexible athleteand does what he can to support his team. After highschool, Tim and Muhammad enrolled at Towson University. Following coach Mescall’s suggestion,Muhammad asked the staff of Disability Support Services about starting ateam. The staff connected Muhammad withJeff Keenan, the assistant director of competitive sports in the Campus Recreationdepartment. Jeff guided Muhammad and Tim through the necessary steps to form ateam with Matt Mescall from The Maryland School for the Blind as the headcoach. To generate interest in the sport, Towson hosted anintramural goalball event. Having doubts about the success of this event,Muhammad recalled, “I basically thought it wasn’t going to work becausegoalball is a visually impaired sport… and Towson is a sighted person school.” Fortunately, those whoattended the event seemed interested in the sport, causing the team to moveforward with their plans to start a goalball club. By the endof the fall 2016 semester, Towson had an official goalball club. Muhammad waselected club president with Tim Utzig as vice president. A secretary, OliviaChapman, and a treasurer, Caitlin Morrell, were also elected. Afterwards, thefour went to meetings to learn how to manage their club budget, submit budgetand facility requests, plan events, and find two safety and facility officers. The fun begins with goalball practice at Towson once aweek. There are times when practice hasto be canceled, however, because there are not enough players. In order to meet the requirement for a sportsclub at Towson, 10 people have to sign a waver. The problem that the team runs in to is that people sign the waver butdon’t show up to practice. In thebeginning, 3 to 6 out of the 10 people that signed the waver regularly went topractice. Now, the team roster consistsof 10 to 12 players with 6 to 8 people showing up to practice. Muhammad hopes that, “We can get, oneday, everybody who signed a waver to consistently come to practice.” Aco-educational team, there is about the same number of male and female players.There are also two visually impaired players. 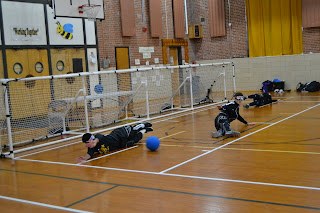 Three players slide across the floor to protect
their goals from the oncoming ball.
Photo credit Dotty Raynor, The Maryland School for the BlindWhen the team does practice, the players work vigorouslyunder coach Mescall’s instruction. As Mescall also coaches down at The MarylandSchool for the Blind, the Towson team occasionally practices with their highschool team. These practices give the younger students “more collegeexposure” as the Towson team can advise the other students based on theirown college experiences. Muhammad also encourages the students, telling themthat “they can go to any university or anywhere and they can continueplaying goalball after graduating from school for the blind.”

The playersalso host or attend different goalball meets, one on one matches at otheruniversities. In the spring, Towson Goalball participates in the NationalCollegiate Goalball Championship, which is a tournament between multipleuniversity goalball teams. In 2017, Towson’s players went to Slippery RockUniversity to compete in the championship. Out of about 10 or 11 teams, Towson earned fifth place with SlipperyRock winning first place. “For our first semester club, we thought thatwas pretty good,” Muhammad said. In 2018, Towson hosted the championship. Unfortunately, only four teams were able toattend. Through coach Mescall’s connections, coach Matt Boyle, the head coachof the Men’s Paralympic Goalball Team for Team USA, helped organize andofficiate the championship. He also brought goalball goals to the campus. “Whenthere’s some downtime, occasionally, he’ll even give us some pointers,”Muhammad said. Coach advises the team onhow to roll the ball and how to slide and dive. He speaks on topics such asform, technique, offense, and defense. Otherscan connect with Towson Goalball on Facebook, Twitter, and [email protected] “I’m also in theprocess of trying to help start other programs at other universities… I am working with people at SyracuseUniversity to see if they’re interested and Norfolk State University inVirginia has shown some interest in starting a program,” Muhammadexplained. Muhammad opens lines of communication with these schools via phonecalls and emails from the team’s email address, [email protected] On top ofthat, Muhammad provides advice for existing teams that are struggling. 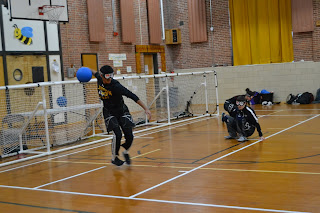 One player about to hurtle the ball
back toward their opponents.
Photo credit Dotty Raynor, The Maryland School for the Blind Duringhis next two years at Towson, Muhammad hopes that the team can grow and thatthey “can have a men’s goalball team and a women’s goalball team.” Tohelp achieve this goal, Towson is celebrating National Blind Sports Day with anintramural goalball tournament on Friday October 5th where anyone can come playgoalball.
Muhammad Waheed is a junior at Towson University. He ismajoring in mass communication and is on the track of journalism and newmedia. A determined individual, he doesnot let his visual impairment stop him from achieving success. Beforegraduation in 2020, Muhammad and Tim want to find other students to continue tomanage the Towson goalball team. Upon graduation, Muhammad said, “I wantto go into the field of journalism and… find a job within the industry. I’d also like to stay involved with goalball, whether that’s coaching, playing,or helping develop new programs.”

Jess Minneci is a senior at Seton Hill University and an intern atAPH. She is a three-time National Braille Challengeparticipant and has previously volunteered with ACB. She is a poet andaspiring novelist who enjoys filming youtube videos about youngadult novels and spending time with her guide dog Joyce.
Share on Facebook
Tweet on twitter
Pin to pinterest

The November 2012 issue of APH News is out! Here you will find information about new products as well as all the goings on at APH, plus much more! Contents1 Exciting New APH Products Announced!2 Miles of Smiles!3 Extra Mile Awards: APH Honors the Authors of Building on Patterns4 Not Resting on Our Laurels: Building Read More…

Seeking Field Evaluators for the US Map with Interactive Talking Pen

APH is seeking field testers/evaluators for the US Map with Interactive Talking Pen for students who are blind and visually impaired.