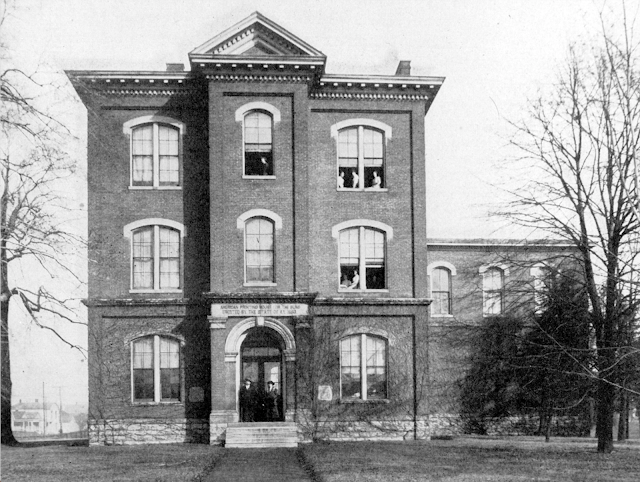 Facade of APH building in 1883. Employees can be seen sitting in the windows and stand at the front door.
This week we celebrate the 140th anniversary of the signing of the Act to Promote the Education of the Blind by President Rutherford B. Hayes in 1879. In the 1870s, APH was a struggling company making excellent books that no one could afford to buy. The Act was only the second piece of federal legislation addressing special education (the first created Gallaudet University). It created a fund of $10,000 from which students across the U.S. could draw to get accessible educational materials from the American Printing House. That stable funding gave the Printing House a foundation from which it could grow and innovate. Back then it was just books, but today we provide a whole catalog of different products “for education and for life.” The fund, we call the “Federal Quota”, was enlarged several times over the next 80 years, but by 1961, Congress realized it needed the flexibility to adjust the fund’s size without amending the Act on an annual basis. The solution was to move the appropriation to the President’s Budget as part of the Department of Education. Every year about this time, APH performs a census of all students at a pre-college level in the U.S. who are blind or visually impaired. By FY2018, the Federal Quota Fund was authorized at $30.4 million and served 55,249 people nationwide. Happy Birthday Federal Quota Program!

Eden Martin
He loves travelling and an amazing writer at FredForum. An extrovert who is found with a group of friends any day except when he is writing.

Quick Tip: Louis, AMP, and UEB. What’s happening with regard to Unified English Braille in Louis and AMP? Let’s find out!

The Spider Podium Holder for Your Phone

Developing Accessible Apps for People who are Deafblind